The stages of the fish life cycle can vary from fish to fish but generally are as follows. Fertilized eggs are collected from the natural environment or from breeding stock tanks. The eggs and sperm are sometimes harvested from the mature fish separately. This process allows for controlled batch fertilization. The fertilized eggs are then placed into larval rearing tanks. Upon hatching most species feed from a yolk sac for a few days, as they are not strong enough to eat live feed yet. Once the yolk is absorbed the larva will be able to eat live feed and continue to metamorphosis into juvenile fish called fingerlings. The fingerlings are separated from the larva tanks to prevent predation of newly hatched larva. Juveniles are typically kept separate from adult tanks until they reach sexual maturity.

In hatchery conditions the fertilization of eggs is conducted with the help of human interaction in order to produce the highest number of larva. Mature adults are collected from the aquaculture system. They are placed in tanks where the water temperature is gradually increased. If the water temperature increase does not induce spawning then harvested sperm is introduced into the circulating water. This stimulates the mollusks in the tank to start spawning. At this point the mollusks can be sexed and are placed in separate circulation tanks. This way the eggs and sperm can be collected separately. After the spawning process is complete the mature mollusks are placed back in the general population system. The eggs and sperm can then be combined in a controlled manner by the hatchery. Once the eggs are fertilized and cell division begins they are placed into grow-out tanks.  When the larva contain a foot and eye they are transferred to setting tanks. If they successfully attach to the shell provided in the setting tanks they are called spat. This stage is where the outer shell of the larva starts to harden and rapid growth occurs. The spat are finally sent to aquaculture tanks to continue to mature into adults. As they mollusks mature they are regularly monitored and counted to ensure healthy populations are being created. 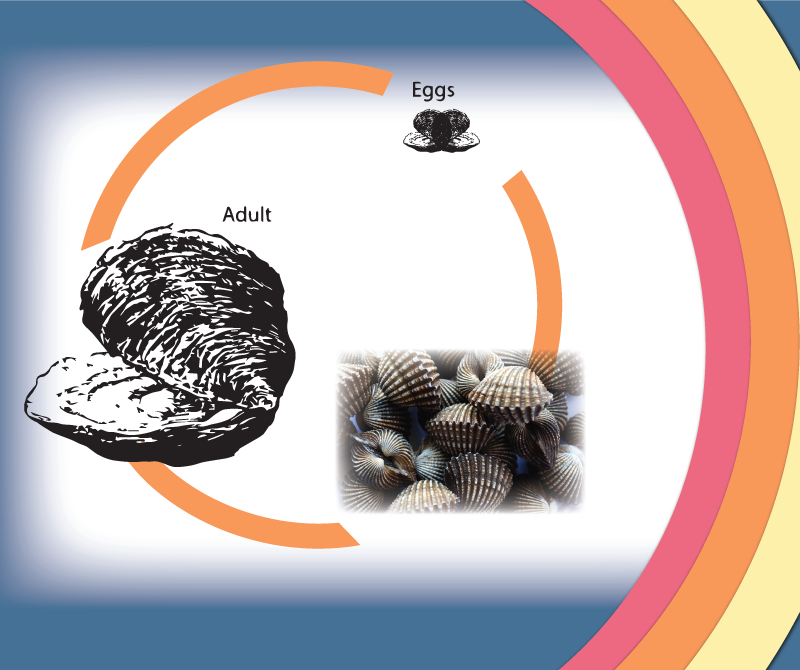